Conformation shows, also referred to as breed shows, are a dog show in which a judge who has been examined and qualified with dog breed standards evaluates individual purebred dogs for how well the dog conforms to the established breed type for their breed, as described in a breed's individual breed standard.  Here is the breed standard for the Weimaraner.

A conformation dog show begins initially with each dog being judged according to a judge's mental image of the ideal breed type as outlined in the individual breed's breed standard. Dog show judges attempt to identify dogs who epitomize the published standards for each breed. Judges are generally certified to judge several breeds.

If you are interested in the idea of showing your next best friend you should make this clear to your breeder when you initially enquire about purchasing a puppy.  Most breeders will sell their puppies on Limited Register which means they are not to be used as show dogs; and are intended for pet ownership only.  Breeders will usually choose one or two puppies from each litter, who they deem may best conform to the breed standard.

The first modern conformation dog show was held in Newcastle-upon-Tyne, England in June 1859, and the only breeds scheduled were pointers and setters.  The biggest 'dog show' in the world is Crufts which is held every year in Birmingham, England in March.  The largest dog shows in Australia are the Sydney Royal Easter Show and the Melbourne Royal Show.

The Canine Association of WA runs 'show' training lessons most evenings of the week for those new to the discipline! 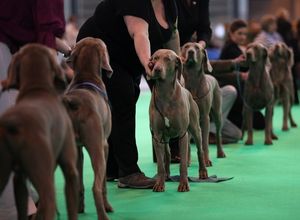